The gods and their messengers, the initiates, brought the crafts to mankind.  In Egypt it was Isis, in Greece Athena — the bright goddess of thinking sprung from the head of Jupiter, who taught men to spin the thread of thought — who bought the arts of spinning and weaving to mankind.  In India Brahma is considered the creator of the great fabric of the universe.  Nimachumil (the great star) the Mayan initiate who first spoke the names of things, taught his people to cultivate plants, to fashion tools, to spin and to weave.

The first handicrafts are gestures of cosmic creation that have been transferred to the sense-world; they are a schooling for men and women on their path from creature to creator.  It is not a question of training the intellect but the will, involving the whole body.  The old pictures are right, when they show Adam and Eve working with their hands, Adam tilling the soil, Eve spinning the thread of wisdom.  It was no curse, that God bid us work “in the sweat of our brow.”  We were pushed into a path of initiation into the mysteries of the earth, into the secrets of matter.

In doing work, in handling matter, men come to know earth-substances; through work they impress this knowledge into their bodies, permeate themselves with the wisdom in matter, with wisdom of the being of the spirit-sea.  Wisdom of the body, which is transformed in the course of evolution into thinking consciousness.

Patient repetition — doing again and again procedures that only seem to be the same, entering ever more deeply and intimately into the qualities of the material — this trains the will.  The movements of a handworker are measured, harmonious, well-considered.  It is not only unevennesses in the substances that are smoothed out, but also unevennesses in character.  The result of his work, the product of his own hands, shows a person how far he has progressed in his schooling.  The blessing from the work of our hands is threefold:

Machines have taken away from us our work, our path of knowledge, our handling of earth-substances.  Devised with cunning, they “save” us toilsome labor — our path.  Their mechanisms are directed to the goal of a finished product, always the same — quickly produced, quickly disposed of.  Turnover of matter instead of mind, profit in place of knowledge.  The injury that ensues is threefold:

Through the last centuries the development of thinking has been emphasized.  This has led to an awakening; we have become conscious citizens of our world.  The mystery of will-training, practiced long before the birth of thinking, in lodges, brotherhoods and guilds, fell into disregard and was forgotten. It is time to recognize again the mystery-character of handicrafts and to apply them anew, but consciously, in the light of spiritual science.

Technology is unavoidable, but handwork is indispensable. Handwork is a form of schooling, by which the mystery of labor can be experienced in its wholeness and in its purity.  It its wholeness, in that it embraces a process that leads from the chaos of primal matter on to a fashioned product; in its purity, since every craft is an image of a higher process of the creative spirit.  And whoever has learned this secret is in a position to make conscious use of mechanical labor. 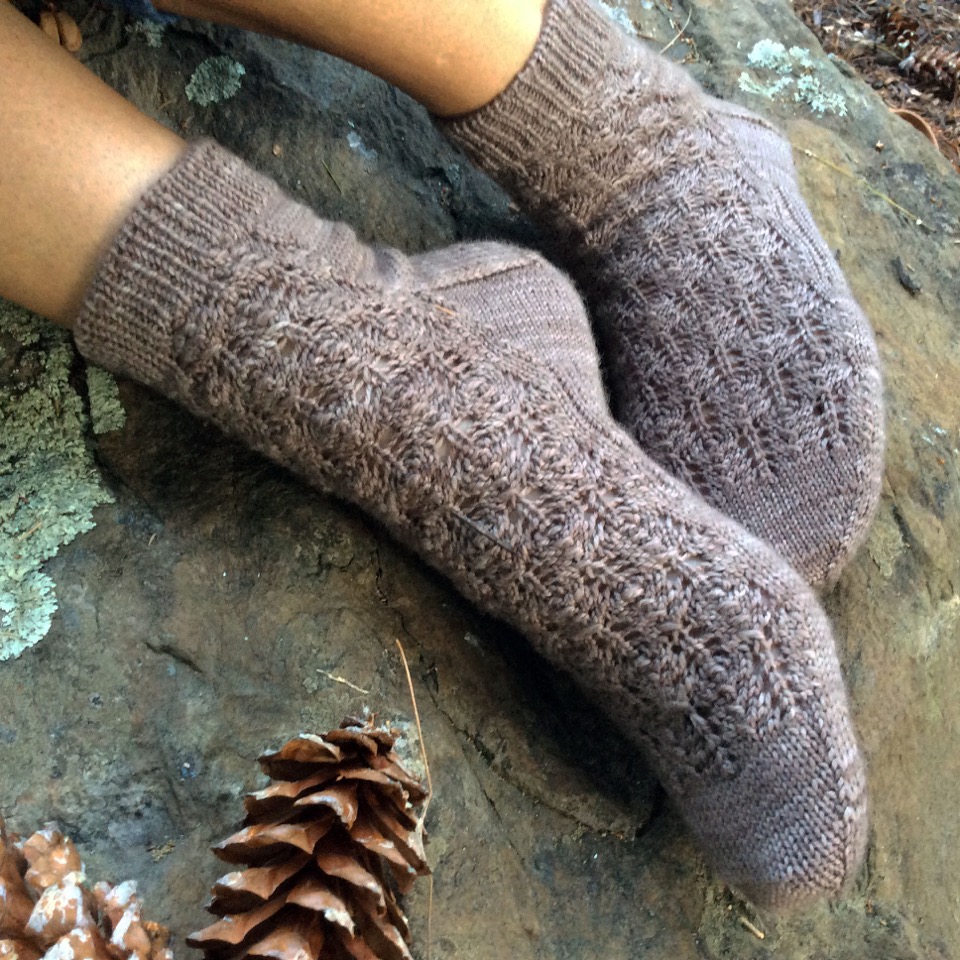 When I see a scattering of cones beneath the trees along my favorite paths, I slow my pace and breathe deeply, savoring the scent of the woods and the crisp autumnal edge to the air. Pine cones are fall’s flowers: their petals are dark, fragile—a harbinger of the coming months of cold. This sock design, with a petite fir cone lace pattern on the instep and narrow cable at the back leg, was inspired by autumn walks and the wonders of the forest floor. It features cuff-down construction, a traditional heel flap and heel turn, and gussets on the sides of the foot. The pattern includes directions for a ribbed band at the arch and a gently tapered toe with a grafted closure.