Episode 37: The Man Who Makes Brooms 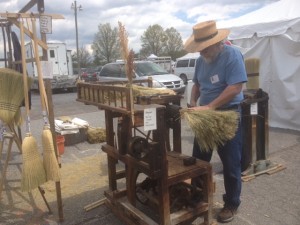 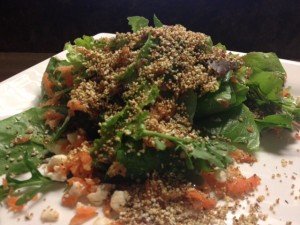 I’m making a slow start of cooking with amaranth this month.  I read that you can pop it like popcorn.  That’s true and it’s pretty tasty. I coated a small pot with olive oil, heated to smoking, then added one tablespoon of amaranth.  Covering the pot with a lid, I held it above the burner and agitated the pot frequently.  Unlike with popcorn, you can eat unpopped kernels.  I seasoned with smoked paprika, dried dill and salt,  then used it as a topping for the first salad from our porch-side garden.  (I also sowed some seeds for new lettuce plants today).  The amaranth tastes nutty and pleasant — it would have been equally good on the salmon I cooked on a bed of sliced lemons in my cast iron skillet. 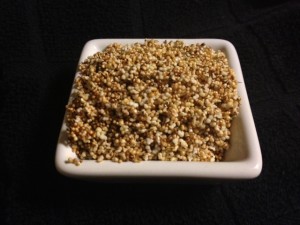 Amaranth was a food crop of the Aztecs and was domesticated as early as 8,000 years ago. It grows on tall, leafy stalks which often have colorful flowers.  Amaranth has gained popularity in recent years because it’s naturally gluten free. The Whole Grains Council has designated amaranth as the grain of the month for May and describes it as a “protein powerhouse” because it is nearly 14% protein.  Amaranth also contains a few things that are rare in other grains: amino acids and Vitamin C. Although whole grains of amaranth never lose their crunch completely, the home cook can achieve a variety of different textures depending on how it is cooked. 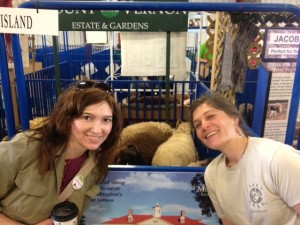 The day began at 4 am; I had to catch a bus from the Lehigh Valley Mall.  It was really nice to travel on the bus — relaxing, reading and knitting on the way to the Maryland Sheep & Wool Festival.  My first stop was the Fingerlakes Woolen Mill, where I met fellow podcaster and Ravelry friend, Sarah (swenstea). Within ten minutes, I completed my first purchase of the day — fiber from Hog Island sheep, a critical conservation breed.  Then we were off to pay a visit to the sheep.  I learned so much while in conversation with Sarah.  See that t-shirt she’s wearing?  Her awesome mother designed it to promote Fiber Trek, her podcast and TV show in the works.  There we are posing with the Hog Island sheep from Mount Vernon.  We spent a lot of time in the barns, and even had a Deb Robson sighting! 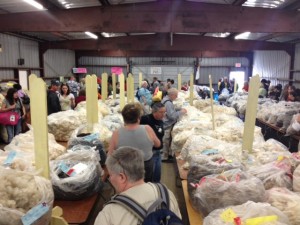 Speaking of sightings, we had quite a few podcaster sightings in the building where fleeces were up for sale.  I tried to stick my hand in every bag, and asked questions of anyone who looked knowledgeable.  No, I did not buy a fleece; however, I’m feeling increasingly confident about my ability to deal with one.  I was attracted most of all to the Jacob fleeces, because of the color variations in the fleece, I think they would be the basis of an interesting spinning and knitting project. 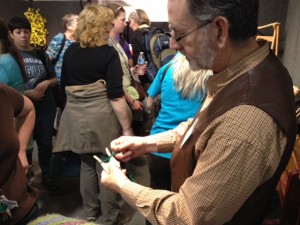 When I asked for shopping advice from YAYH listeners, several of you suggested purchasing a special tool.  In the Main Exhibition Hall, I discovered Stephen Willette, who was demonstrating how to make cording with his beautifully-crafted lucets.  I purchased one in curly maple — it’s gorgeous.  Stephen even gave me a lesson on how to use it, and sends every customer home with a clearly-printed and thorough instruction manual. 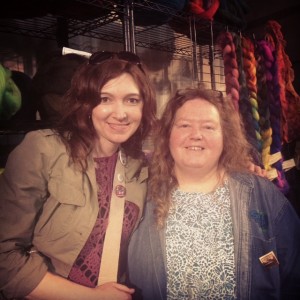 I spent quite a bit of time at the Spinners Hill booth, visiting with the proprietor, Lisa Ann Merian.  She is my father’s cousin and I hadn’t seen her for many years.  It was great to reconnect and learn that Lisa has been teaching a Lamb to Loom series for children.  So, we gabbed about the fiber arts, education, and family stuff.  I left with a special fiber batt, the handiwork of Aunt Marie, who’s 91 and chooses the crazy colors for batts and then cards them on an electric carder.  Way to go, Aunt Marie.  We gabbed so much that I was the last to board the bus for the ride home.

This week, I share “The Man Who Makes Brooms” by Naomi Shihab Nye.  I was thinking about this poem as I watched Bob Haffly of Lone Oak Brooms demonstrate how he makes brooms on his circa-1895 equipment. If you’ve never had the chance to visit Bob, you might enjoy this video. In an interview about her poem, Naomi Nye explains that it was inspired by a trip she took with her father to Jerusalem in the 1980’s.  Her father had remembered the broom maker from pre-1948 days.  The political and personal come together in this extraordinary poem.