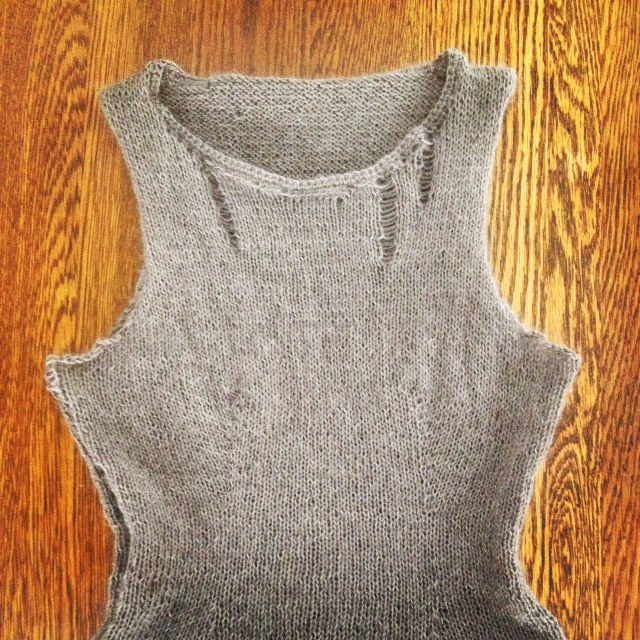 We interrupt this sweater to bring you a podcast!  This episode features the following segments: Ever-expanding Skill Set, The Back Porch,  and Double Happiness. 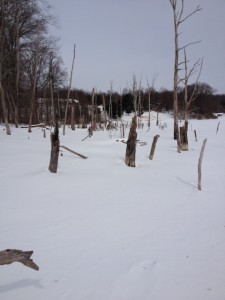 In the event of a snow-pocalypse, which is the only kind I can imagine as we limp our way out of a snowy winter here in the Northeast US, I definitely want to have snowshoes among my provisions.  This weekend, I tried snowshoes for the first time, taking a hike with my friend Kim at Merrill Creek Reservoir.  The usual population of snow geese that over-winters on the reservoir had mostly flown further south; what remained of the flock occupied a small space of open water near the tower.  We could only spy them through binoculars.  What an incredible feeling to crunch around on the icy surface above several feet of snow.  I think I want a pair of snowshoes so that I can go out any time. 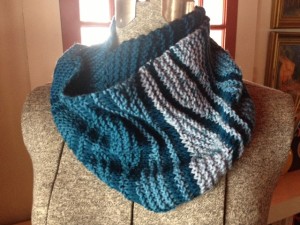 This week I completed a swing knitting project — a scarf project from Brigitte Elliot of Skacel Fiber Studio.  This scarf employs the technique of German short rows to create gradually shifting fields of color amid solid furrows of color.  I used a US size 8 circular needle and Zitron Zeitlos, a twelve-stranded, cable-plied yarn.  The technique grew easier as I continued the knitting.  This pattern has the option for a scarf with leafy motifs at the end or a cowl that’s created by a provisional cast-on and kitchener stitch.  I chose the cowl, and completed two repeats of the fields and furrows. Blocking helps to easy the fabric and intensify the patterning.  The result is wonderfully textured and squishy. 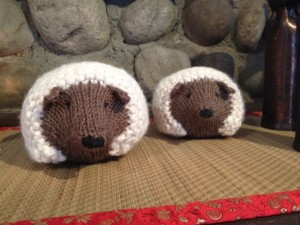 Do you recall Mrs. Tiggly Winkle, the washer woman  from the Beatrix Potter stories?  I had been thinking about her ever since I heard Paula of Knitting Pipeline talk about her experience in the Lake District and her knowledge of Potter as a important force of land conservation in the UK.  I decided to make knitted hedgehogs for a colleague who is expecting twin boys.  This pattern from Purl Bee includes an excellent photo-tutorial for making the cutest, fat little hedgehogs.  I stuffed them with fluffy fiber and included a small bag of poly-beads at the bottom of each belly to keep them from rolling over.  To make their little black noses go “sniffle, sniffle, snuffle,” I pushed a bit of crinkly material into their snouts. 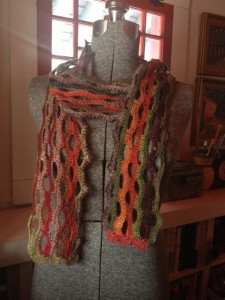 It has been nice to work on a crochet project over the past few weeks.  This pattern, Indian Lentils, was a gift from Andrea Delhey.  You cast on with the appropriate number of stitches to get the length you desire, then work back and forth in very long rows.  It worked up nicely in earthy Noro colors.  Check out Andrea’s Ravelry store for some clever designs.  Since I used yarn thinner than that specified, I made half-double crochet stitches rather than double crochet. 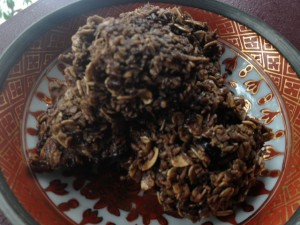 Oatmeal cookies without baking?  Plus chocolate? Plus coconut?  That is a good day!  I also added some chopped dried cherries.  Thanks to Linda from Delaware who posted the recipe on the Ravelry thread for the Bulk Bins Cook-a-long.  February is all about oats and we have just a few days left.  Post your recipes, photos, and links for a chance to win a pattern.  Use the #bulkbinscal when you post to Twitter or Instagram.