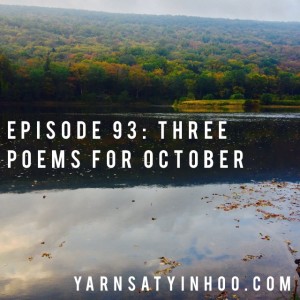 This episode includes the following segments: Chin Waggin’ Ever-expanding Skill Set, The Back Porch, The Front Porch, and Off the Shelf.

It’s October, and in this episode I share three new-to-me poems that I think you’ll enjoy.

Neighbors in October by David Baker

Raking Near the Great Works by Megan Grumbling

I made sweet potato and roasted red pepper hummus, using an adaptation of this recipe, suggested by kuntzknit. This spread is great on sandwiches, as a dip for vegetables, and as a decadent addition to some pulled pork quesadillas I made with leftovers.